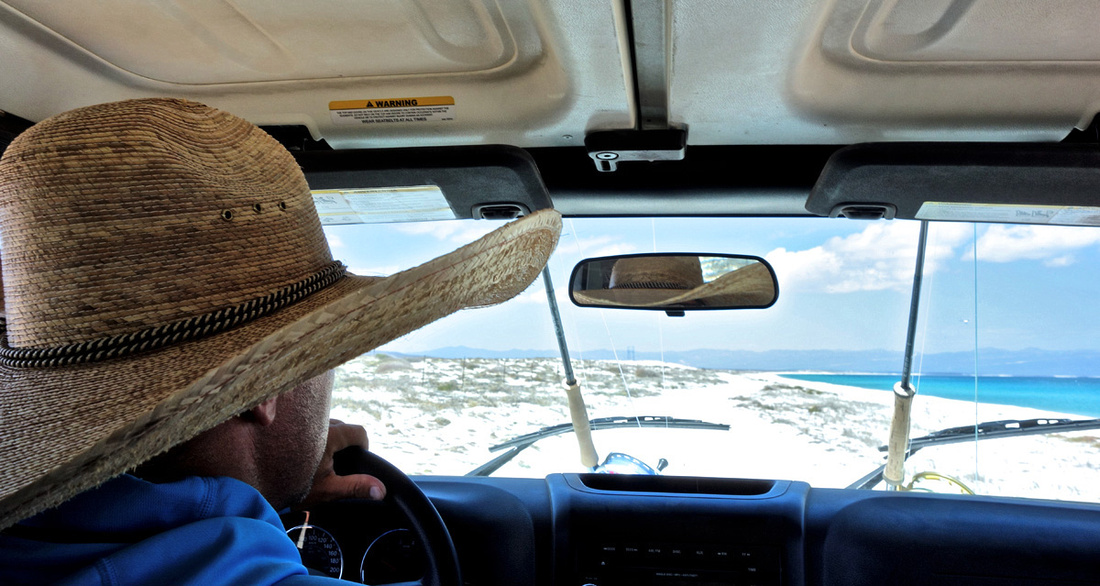 The jeep pushed confidently through the soft sand closer and closer to the turquoise sliver on the horizon. From fifty feet back it looked like a solid and capable rig. From twenty feet out you could certainly tell this vehicle had been around the peninsula a few times. At the rental facility where I first hopped in and went to let out the clutch in first gear- I shivered with doubt. Yep, it's a well-used rental car alright! When you want a 4x4 for the remote desert exploration, you want a stick shift. And when you get a stick shift in a Mexican resort town, it's been driven by a lot of people who've only driven automatics. This poor Jeep had been through the wringer, and I felt sympathy for it like an abused dog. Reluctantly, we headed away from civilization and towards the backcountry, unsure of just how far the rig would take us.

Cerveza Fria. I learned quickly that this means cold cerveza, which stopped us in our tracks at this point. Bryan Huskey photo 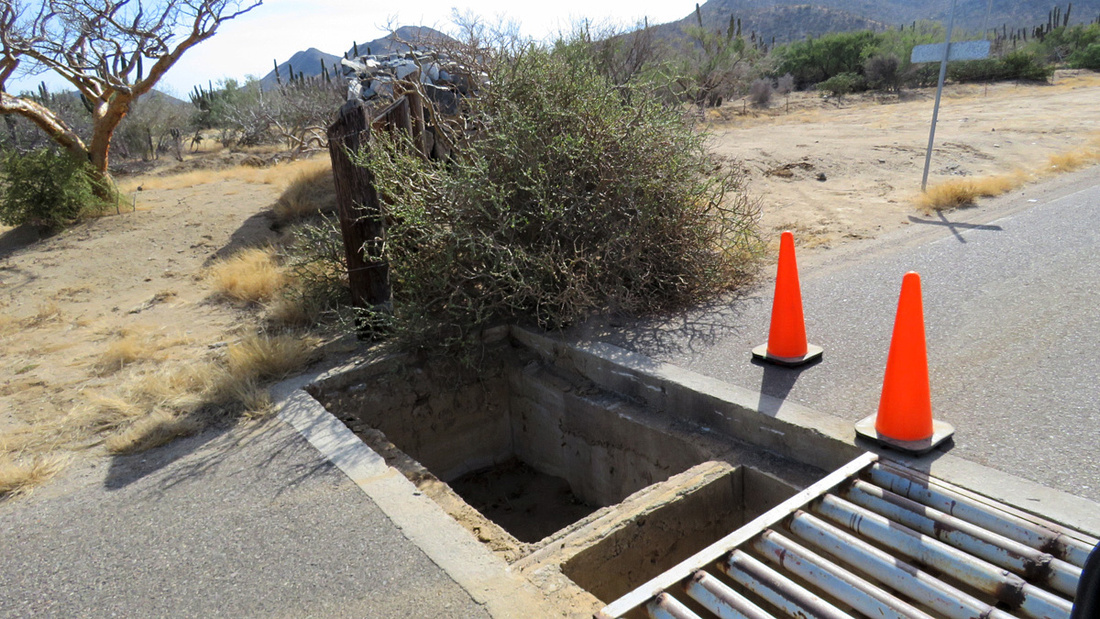 When you see cones on the road in Baja, it means there may be a minor bump in the road. When you see painted rocks- you really better watch out! Bryan Huskey photo

I've been fishing down in Baja a few times now. No veteran at the game by any stretch- but I've started to get a basic lay of the land and gained some understanding of places that I may be able to find rooster fish. Those are the fish we all dream of right? Well at least I do. And even though I've been fishing for roosters in Baja more than a handful of times, I've never been able to land anything but juveniles.

I'm beginning to discover that I am the kind of person who is drawn to doing things the hard way. Or for some reason I just think certain ways of fishing are more interesting than others. By interesting, I guess I mean there are lots of unknown variables. And this kind of approach, when done by choice is really intriguing to me. The choice to DIY a trip from the tarmac on, the choice of no guide, no panga, no ATV, no live bait or teaser rod. Sure those things all make perfect sense and greatly aid in success, which is why they all are evermore common along the Baja coast. "But how rewarding would it be to catch my first rooster fish without any of those advantages?" I'd recite over and over.

Like the archery elk hunting which I love so much, success could be found on any rookies first day, or it could take years for all the elements to align and to come to fruition. Except rooster fish don't bugle or leave tracks. In exchange however,  there are advantages of being able to spot feeding fish as they push prey into the air with a white spray and convection of shore birds that can be spotted from hundreds of yards away. So this hunting is quite visual, either by the flags of a feeding frenzy or the ghost like shapes of the fish themselves.

What's always amazing to me is just how far away fish can be seen along these beaches. Spend enough hours staring at knee-high waves rolling into the shore and over time, the slightest shapes and shadows begin to materialize. A quick hustle sprinting closer will typically reveal something.. you just never know what it's going to be. Maybe a submerged plastic bag drifting along, maybe just some seaweed, or maybe a marauding pair of predatory fish. 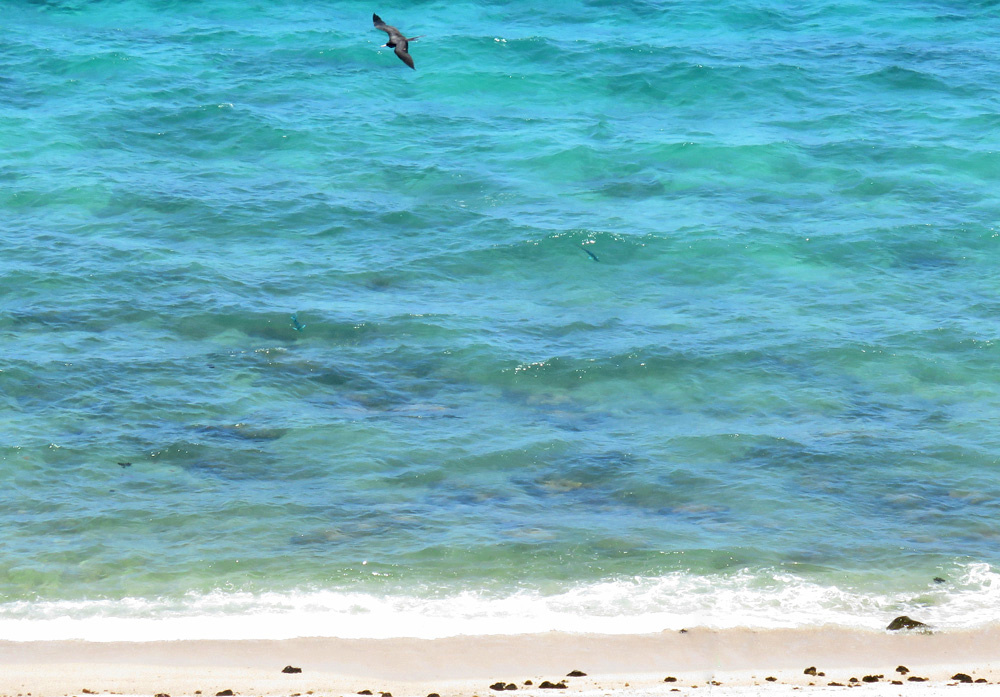 That's what I wondered several days into this trip while scanning the mildly wind-chopped water,  squinting to locate anything that could be fish. I'd noticed several large needle fish patrolling the area, and throwing flies at them was so fun because the instant the fly hit the water the fish would spot it from nearly any direction and close in with such speed it was thrilling just to witness. Not many would actually eat my fly, but after a few hard slams I figured I'd better tie on a fly that I was willing to loose, given I wasn't properly tackled for such toothy critters. 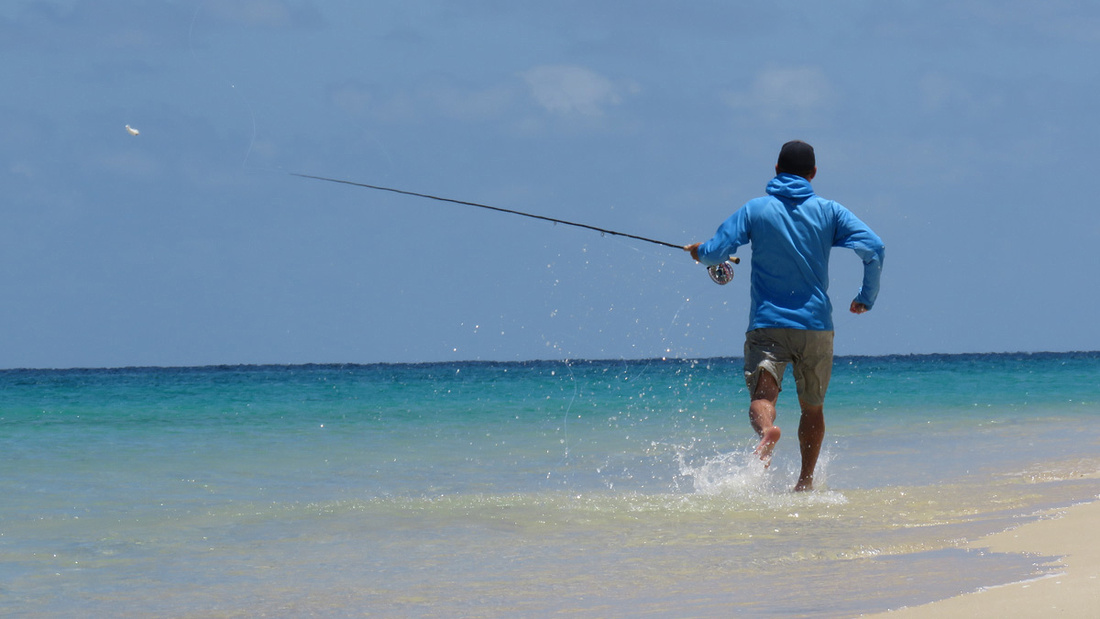 Maybe it's falling into the trance I love so much. Walking the beaches for miles with a rod in hand, the sound of the ocean, the seabirds, maybe a distant boat's hull breaking waves... It's a simplicity that I seem drawn to. I've noticed that once I start walking- looking for signs of fish and reading the information in front of me- I get into a groove, a zone if you will. Depending of what kind of beach I'm on, I'll sometimes let my fly drag in the sand while I walk. Seconds count when fish appear, and an angler needs to be ready with adequate amount of flyline already stripped off the reel. The line needs to be carried in such a way that can quickly be whipped into an effective cast. Usually I'll carry my fly in my hand with 60 or so feet of flyline dragging in a loop behind me. But one particularly long walk a few days prior I'd let my fly just drag through the sand. I'd since noticed the hook had been worn down considerably by this, so I demoted the fly to the JV roster. 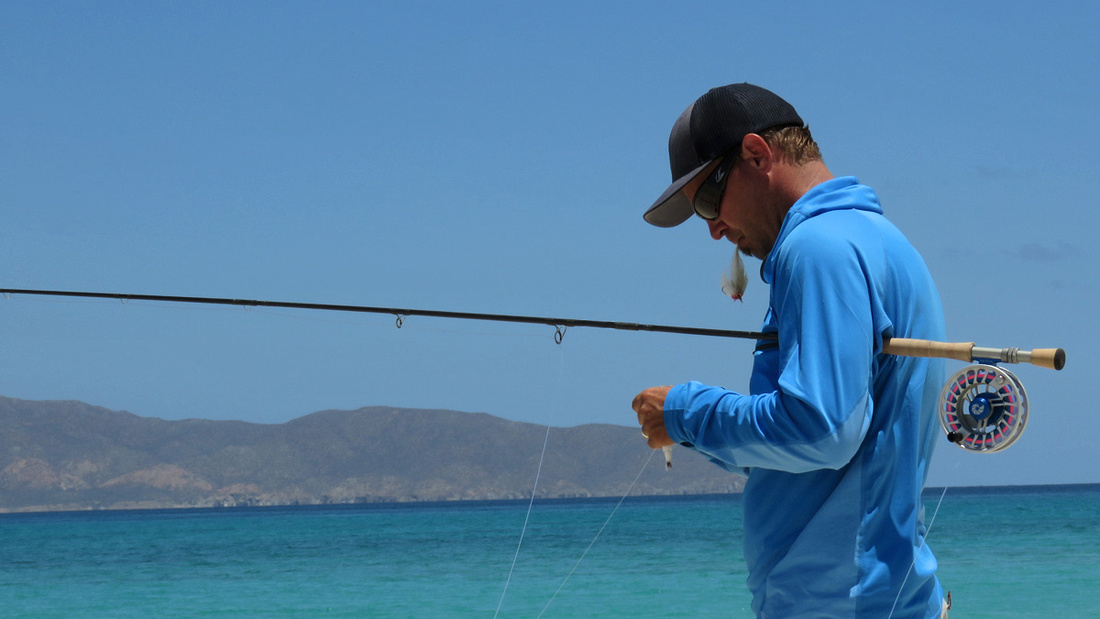 Bryan changes flies, opting for a fly that could be sacrificed. Alison Kelsey photo 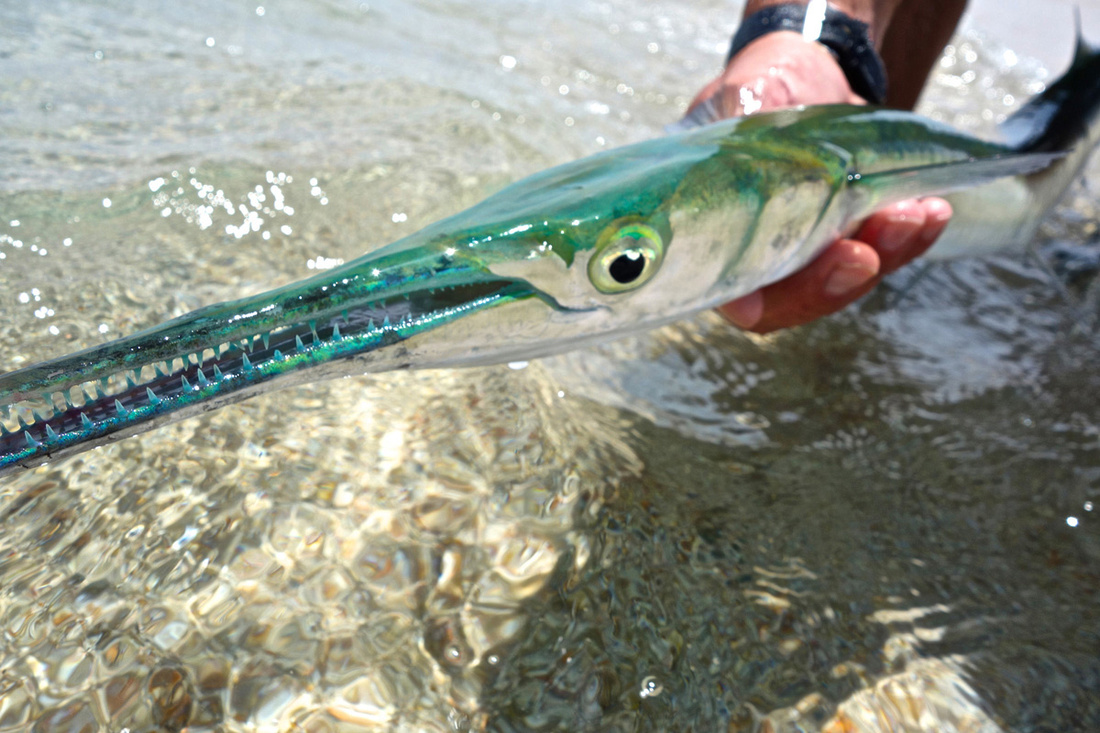 Needle fish. Wonder why they call them that? Paul Moinester photo

So as more and more large needle fish came funneling past this shallow beach I was fishing, I reached for a fly that I could spare. A fly that would no longer be considered for shots at legitimate target fish like roosters, jacks or dorados. The mullet pattern was one of a dozen I'd ordered for this trip, so sacrificing one here to witness the lightning fast attack of a 4 ft needle fish was something I considered fair trade. I paced up and down the span of beach where I'd been spotting fish. Out where the pastel colors of shallow water turned electric blue a faint smudge appeared and slid along a gradual heading towards the shore. I broke into a mild trot to get a closer look. As the points of our triangle narrowed, I noticed there were two fish and they were moving in a direct line, unlike the swerving, scavenging needle fish. These fish were moving fast too, so I shifted down and turned on the jets to catch up and see what they were. It was so easy to tell they were roosters. The elegant stripes were unmistakable. Beautiful fish cruising intently along the beach as if they were pulled from a fast moving rope.

At this point I recognized an opportunity was developing in front of me and I need to execute. We'd been fishing 4 days now with no shots at roosters. I'd been trying over the corse of years to put myself in this very situation and only a handful of times had I been close. It was simple. All I had to do was run fast enough to get myself ahead of the fish and put my fly in front of them before they passed and vanished forever. They were a ways out there. Frantically I stripped (waaaay too much) line off the reel and sprinted along the beach positioning myself for a shot. I had enough time. I could see the fish continuing their course, about 70ft off the sand paralleling the beach at my 1:30. From what I can remember I grossly overshot their distance. But fortunately I also led them by far too much, so I had to wait a few paralyzing seconds before I could begin stripping. This gave the 400gr line time to sink, a godsend I'm sure now in hindsight. I watched as the fish approached the approximate zone where my cast had met the ocean. I didn't want to strip too early, and pull my fly out of range before they saw it, but I certainly didn't want to wait till they were over my line and have the fly escape below them without drawing their attention. Somewhere in the middle there I began stripping, cautious at first, stuck in the limbo of the scenario. Then, without question I saw the behavior of the fish change. In formation, both fish banked hard towards the beach. I began racing my fly as it was now clear the roosters were tracking it like hounds.

The rush of drawing something you want so bad towards you as fast as you can strip a fly is intoxicating. Coming from distant shadows in the ocean then developing into the most incredible looking fish right before my eyes, the pair closed in on my fly, which at this point was maybe 30ft out. As I continued pulling line as fast as I could, their combs broke the surface as they charged into the shallow water and breaking waves at my feet. I'd been backing up as this storm of energy and emotion came at me. I was nearly out of line and about to wave my rod in a final zig-zag at the waters edge. But for the last few strips before my fly reached dry sand my line was still strait and the fish were still closing in on it. As an incoming wave provided maybe a foot of depth, I began to rotate to my left, opposite the slight angle the fish were coming towards me.

As I rolled left and stripped, both fish flared their combs in the crumbling wave and turned tight U's away from me. When they did, the line tightened in my hand and the rod became heavy as I now lifted to feel the heavy pull of a fish. The pair of fish ran hard back to the deep blue water, one of them taking me and my fly with it. Once settled and tight with loose line now safe on the reel I shouted to my wife Ali and friend Paul. Moments later the fish launched into a series of tarpon-esque jumps like none I've ever seen or even heard of rooster fish doing. It was pure thrill. It was pure joy. 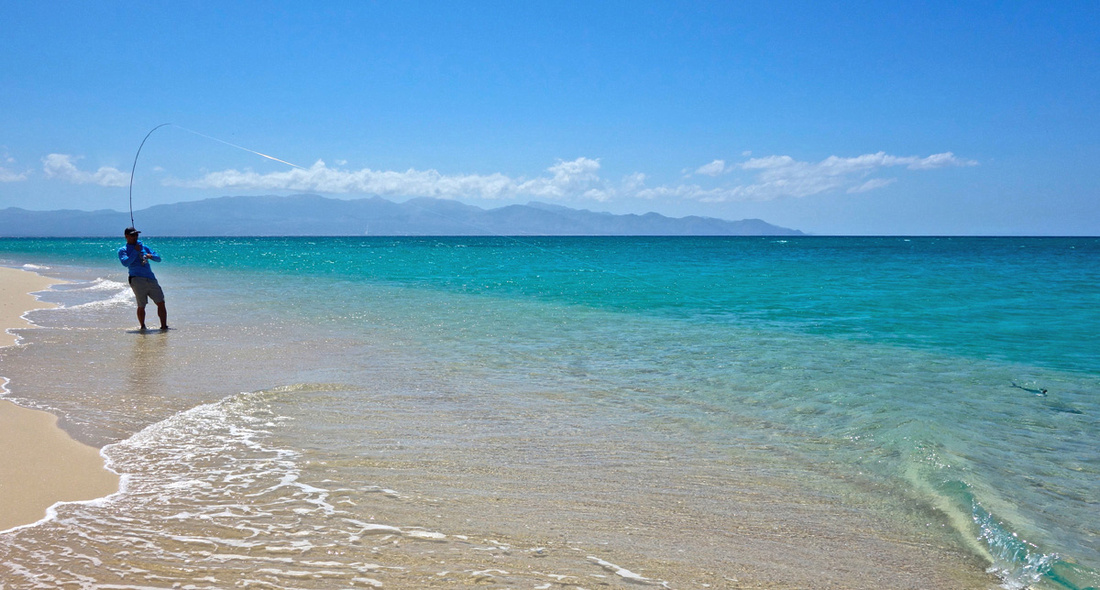 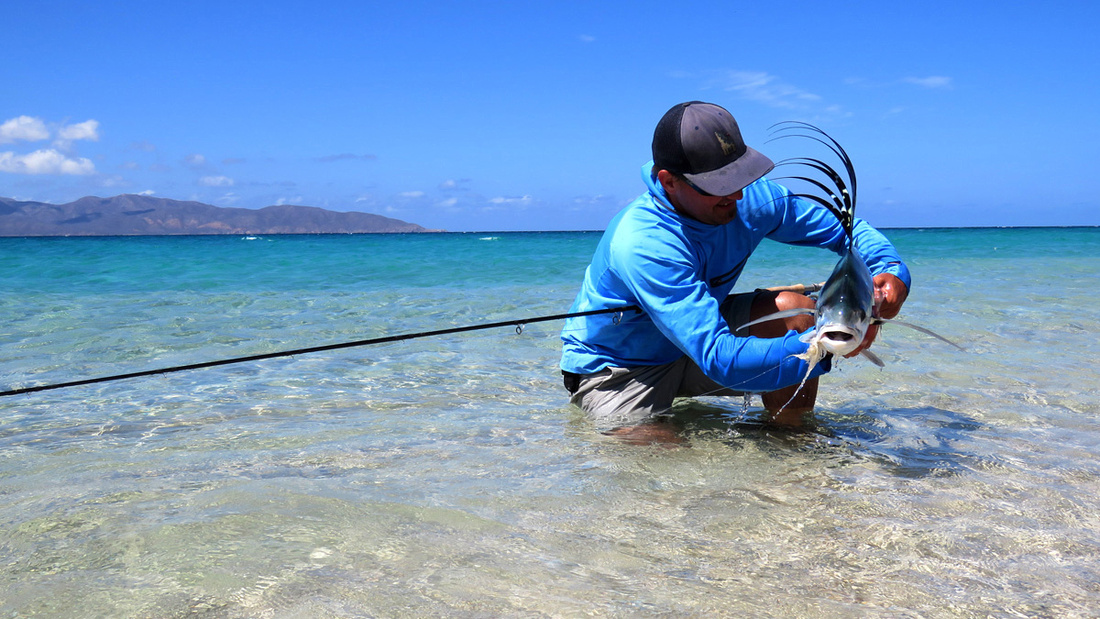 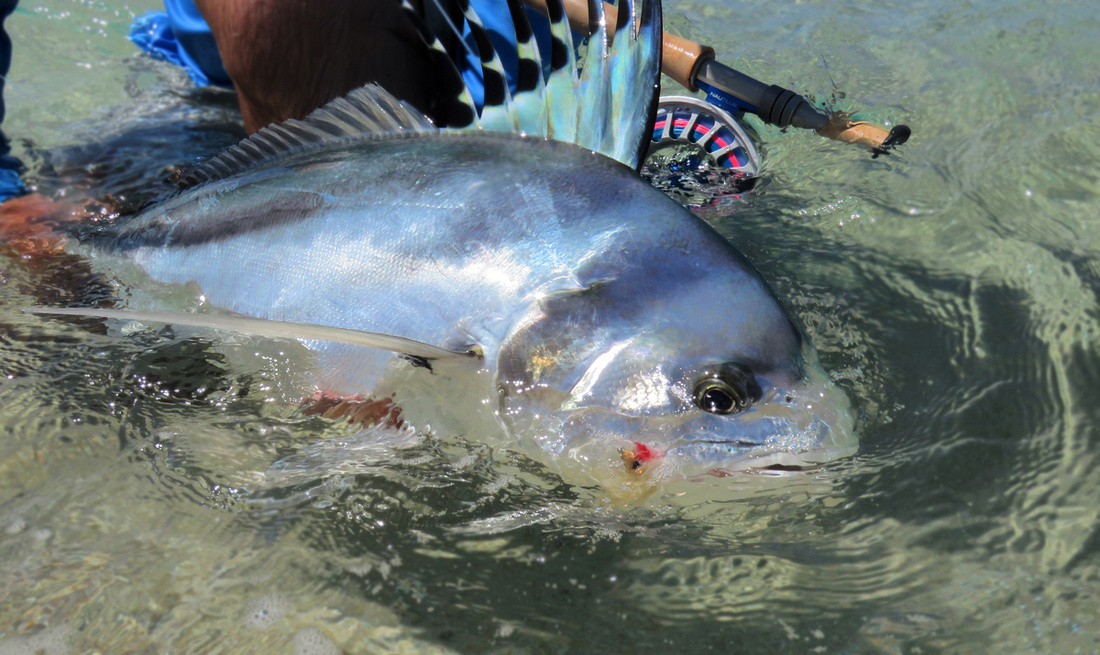 Rooster fish in hand, one of the coolest looking animals on earth! Paul Moinester photo

Playing this fish was incredible, formidable and fulfilling. It was so rewarding to FEEL something I'd wanted for so long. To feel it's force, it's meaning, it's impact. That fish represented so much for me personally. While I watched the reel scream and cranked down a flexing rod, more than a simple fish was on the line. For me it was a milestone victory I'll cherish the rest of my life. It was a fish I'd pursued many times with nothing short of crushing defeats, but it was also the formation of an unbreakable bond with this place. A place that my late father loved and described with such color and enthusiasm when he spoke of it, and now a place that he and I share together- if never at the same time, where we like many others come to fish, and leave forever changed. Unless of course a stroke of fortune renders their rental Jeep useless and strands them there. Something I hope for each time I return.